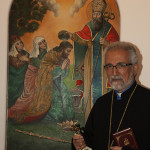 Archpriest Fr. Nerses Manoogian, with the baptismal name of Haroutiun, was born in Beirut, Lebanon. He is a graduate of the Armenian Theological Seminary of the Catholicossate of Antelias, Lebanon. He was ordained Archdeacon by his dean, Bishop Karekin Sarkissian, the blessed memory, the former Catholocos of all Armenians of Etchmiadzin.

As Archdeacon, he served the two Armenian communities of Isfahan and Abadan, in south Iran. In 1974, he married Nektar Megerdichian and blessed with two children, Sevag and Sally.

From 1981-86, he was invited by the Prelate of Eastern Prelacy, His Eminence Archbishop Mesrob Ashjian, to serve Detroit Community in the capacity of Armenian Studies Program Director in the ARS Day School, Principal of the five Saturday Schools, and Choir Director of St. Sarkis Armenian Apostolic Church of Dearborn, Michigan.

Fr. Nerses has numerous publications in the parish newspaper, “Illuminator”. He published a booklet about the Armenian Church called “Your Church and You”. In 1998, he Published a book called “The 4 Ceremonies of the Armenian church”, which is the English and modern Armenian translation of “Blessing of the Water,” “Antasdan,” “Opening of the Portal” and “Blessing of the grapes” Ceremonies. “Sunrise Service” with modern Armenian and English translations, “The Ceremonies Of The Holy Week”, an English translation, the ceremonies of Peace and Compline (Lenten vespers) with modern Armenian and English translation and numerous spiritual and educational articles in the “Illuminator.” Other publications of Der Nerses include: “From The Pastor’s Desk” Volume I – 1998, “Intimacy with Narek” in English, «Մտերմութիւն Նարեկի» two separate volumes, published in 2021, “From the Pastor’s Desk” Volume II in English. «Հովիւի Գրասեղանէն» two separate volumes in English and Armenian, 2022.

Der Nerses brought into life the women’s organization called Altar Guild with the sole purpose of taking care of the needs of the altar. Another program Der Nerses brought to life is the program of Altar servers. It is a program which gives opportunity to our youngsters to serve the altar as candle bearers, fan bearers and censer bearers thus giving them a sense of belonging.

He has also been one of the co-founders of the Prelacy’s St. Gregory of Datev Summer Institute for the youth and an active teacher of the Institute. Fr. Nerses Manoogian served on the Religious Council of the Prelacy as well for 11 years.  He retired in 2022. 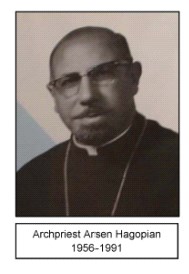 Archpriest Arsen Hagopian, pastor of St. Gregory the Illuminator Armenian Apostolic Church from 1956-1991, was born on March 15, 1920 in Aintab to Elizabeth and Hagop Hagopian. His baptismal name was Antranig.

In 1922, the Hagopian family fled to Aleppo, Syria to escape from the aftermaths of the Turkish persecutions. There, the young Antranig was reared and educated in a safe and peaceful environment.

On June 8, 1947 Antranig married Marie Manoulian and on August 29, 1948 the young couple were blessed with a son Hagop. Meanwhile, Antranig expressed a desire to become a Kahanah and enrolled in the Antelias Theological Seminary. He was ordained on December 2, 1951 and was named Der Arsen. Subsequently he was sent to Nicosia, Cyprus, where he and his family lived from 1951-1955. A second son Vahe was born on June 23, 1951.

In 1955, Der Arsen was invited to America in order to serve the parish of St. Gregory the Illuminator Church located at 16th and Oxford streets in Philadelphia, Pennsylvania. He arrived in Philadelphia on January 3, 1956 without his family since his wife was about to deliver a third child and could not accompany him. A daughter Elizabeth was born on January 15, 1956 and Yeretzgeen Marie and their three children were finally able to come to Philadelphia on February 14, 1956. They were warmly welcomed by the Philadelphia community and made comfortable in a home in West Philadelphia among many Armenian neighbors. A third son was born on June 16, 1959.

A need to relocate our church to another section of the city gradually became apparent and after extensive searching for land on which to build, a fund-raising was held in 1959. A property was bought at 8701 Ridge Avenue upon which we built the beautiful church we have occupied since May 1, 1967.

Der Arsen, our Spiritual Father, guided us, encouraged us and helped us in very possible way to achieve our dream of having a new church and we are ever grateful.

The honors received by Der Arsen over the years have been many. On December 20, 1958 he was presented with the Pectoral Cross or the Lancha Khatch which he received from Catholicos Zareh I. On February 26, 1966 he was given the right to bear the Flowered Sole called the Dzaghgee Pilon. In 1963 Der Arsen, having been named a World Delegate or Askayeen Yerespoghan, traveled to Beirut, Lebanon for the purpose of electing a new Catholios to preside over the Giligia See after the death of Zareh I. On January 28, 1969 Der Arsen was given the title of Archpriest or Avak Kahanah by Catholicos Khoren I of the Giligia See. In addition to his duties as pastor of St. Gregory’s. Der Arsen has served as a member of the Prelacy Executive Council for many times.

Der Hyre and Yeretzgeen are the proud grandparents of six grandchildren – three girls and three boys.

We, the members and friends of St. Gregory’s Armenian Apostolic Church, wish to express our deepest appreciation and love to Der Arsen and Yeretzgeen for the devotion and enthusiasm with which they have served us from 1956 to 1991. 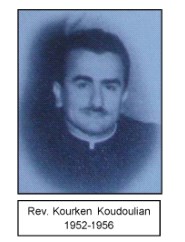 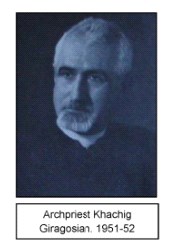 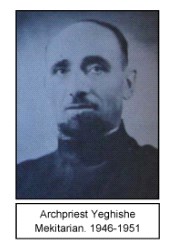 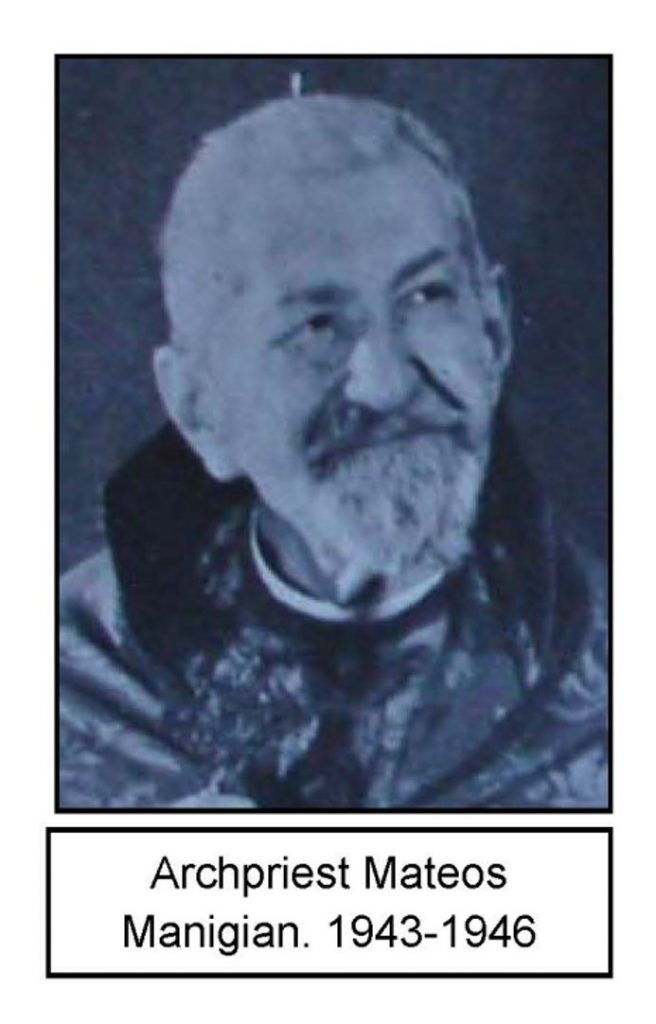 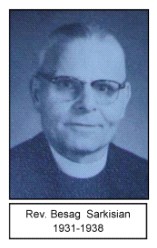 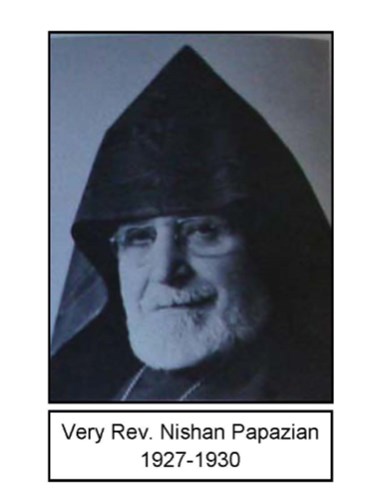